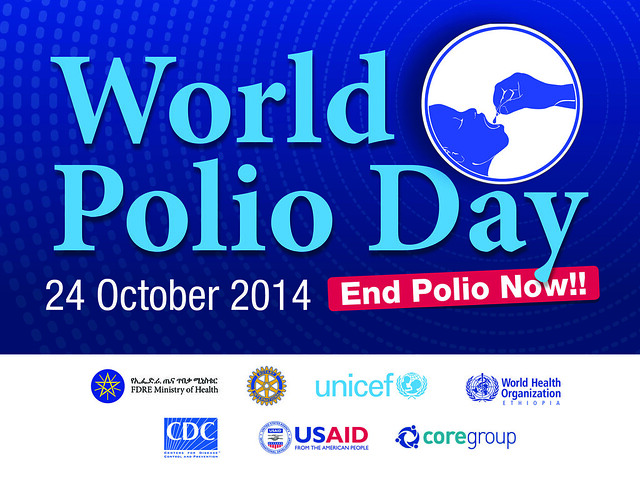 Addis Ababa, 24 October 2014 – The World Health Organization, UNICEF and Rotary International stand together in the fight against polio and in commemoration of World Polio Day, 24 October 2014.

Despite significant progress made in polio eradication since the launch of the initiative in 1988, the wild poliovirus (WPV) continues to infect people, causing life-long paralysis and disability. The Horn of Africa was struck with a polio outbreak in April 2013. To date, 223 cases of WPV1 have been confirmed in Somalia, Kenya and Ethiopia. The date of onset of the last case confirmed in Somalia was in August 2014.

Up until 2013, Ethiopia was polio-free since 2008. However, since last year, Ethiopia has confirmed 10 cases of polio in Doolo Zone, Somali Region. Ethiopia’s response to this crisis has been fast and aggressive. Since June 2013, 11 rounds of polio immunization campaigns have been conducted in addition to ongoing border vaccination at 45 permanent vaccination posts along the border with Somalia. National immunization days (NIDs) in October and December 2013 reached over 12 million and 15 million children, respectively. Due to these aggressive efforts, the last case of WPV in Ethiopia was confirmed more than 9 months ago, in January 2014.

The success of these polio immunization efforts is a result of national commitment and the coordinated efforts of immunization partners. We recognize those who are in the forefront of the fight against this debilitating disease: health workers, vaccination teams, mobilizers, traditional and religious leaders, partners and others who work long hours, and walk long distances, to ensure all children are reached with the polio vaccine.

Rotary International launched a new campaign that promises every dollar donated to Rotary will be matched 2-to-1 by the Bill & Melinda Gates Foundation. On 21 October 2014, Rotary International announced the release of US$ 2 million to support polio eradication efforts in Ethiopia. UNICEF supports communication and social mobilization, vaccine procurement, cold chain and logistics and technical assistance while WHO is providing technical assistance, coordination support, including across cross border coordination, and surveillance support.

As World Polio Day is commemorated on the same day as UN Day today, we remember our efforts within the broader context, a day when we uphold a child’s right to health as a basic human right for all. As we look to 2015, we measure the success of our efforts against achievement of the Millennium Development Goals, acknowledging the contribution of polio immunization efforts to MDG achievement. In two weeks, Ethiopia will conduct the first of two rounds of the 2014 NIDs aiming to vaccinate over 13 million children. We look to all partners, decision makers, donors, leaders and other stakeholders to provide their support so that we can ensure no child is left behind. We will continue to work together to END POLIO NOW.

One thought on “World Health Organization, UNICEF and Rotary International, appreciate frontline workers in the fight against polio and call for sustained support for eradication efforts.”