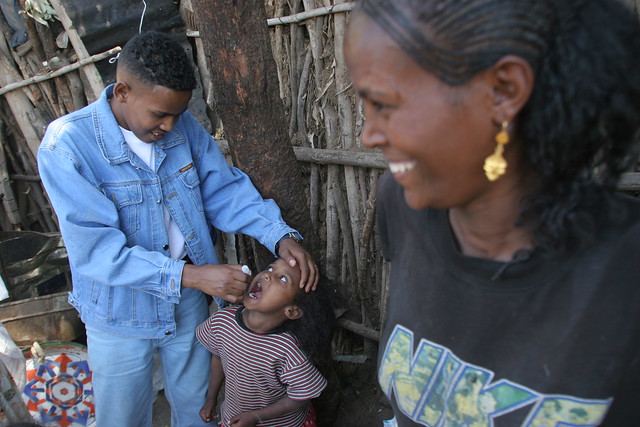 Addis Ababa, 12 August 2015 – Support from the European Commission’s European Union has successfully contributed to efforts to contain the spread of the wild polio virus in Ethiopia, the United Nations Children’s Fund (UNICEF) has announced today.

“Following a robust and aggressive response to the onset of the 2013 Horn of Africa polio outbreak in Ethiopia, the Ministry of Health, partners and frontline workers have worked hard to ensure millions of children have been vaccinated with the polio vaccine,” said Gillian Mellsop, UNICEF Representative to Ethiopia. “As a result of the response, transmission of the polio virus has been successfully interrupted. This success is due to the tremendous support from the EU and other partners, which has ensured teams on the ground have had the adequate vaccines to immunise and ultimately, protect children against polio and stop the outbreak.”

The generous €4 million financial contribution, for polio eradication in Horn of Africa, provided Ethiopia and South Sudan with funds for the procurement of the oral polio vaccine to respond to the Horn of Africa polio outbreak.

In Ethiopia, a total of 23,783,000 doses of bOPV were procured for four polio supplementary immunisation activities (SIAs), in vulnerable, polio high-risk regions such as Somali, Gambella, Benshangul-Gumuz, Afar, Dire Dawa, Harari; in other high-risk zones in the country and refugee camps. The campaigns also included one nation-wide campaign covering all regions which aimed to vaccinate every single child in the country under the age of five years – over 13 million children. This supplementary immunisation complemented routine immunisation and sought to interrupt circulation of the polio virus by immunising every child under five years of age with two drops of oral polio vaccine for every round, regardless of previous immunisation status.

The campaigns, which were carried out in some of Ethiopia’s remotest parts, reaching hard-to-reach mobile and pastoral populations, successfully targeted children who were either not immunised, or only partially protected, and boosted the immunity in those who have been immunised.

The EU support contributed to regional efforts to interrupt polio and significantly accelerate the global push to eliminate polio. The polio virus can be swiftly transmitted through water or food contaminated with human waste from an infected person. There is no treatment against polio and vaccination remains the vital key to providing life-long protection for children. The vaccine – which is just two drops in the mouth – is safe, effective and prevents paralysis. Children should be vaccinated several times to ensure they are protected for life.

Through the generous support of the EU and other polio donors and partners such as The Centres for Disease Control and Prevention; Crown Prince Court, Abu Dhabi, UAE; the Bill and Melinda Gates Foundation; National Philanthropic Trust; Slim Foundation; Rotary International; Swedish International Development Cooperation and others, successful closure of the outbreak in Ethiopia has been achieved. Continued collaboration is critical to sustain gains for polio, routine immunisation and child and family health in Ethiopia.