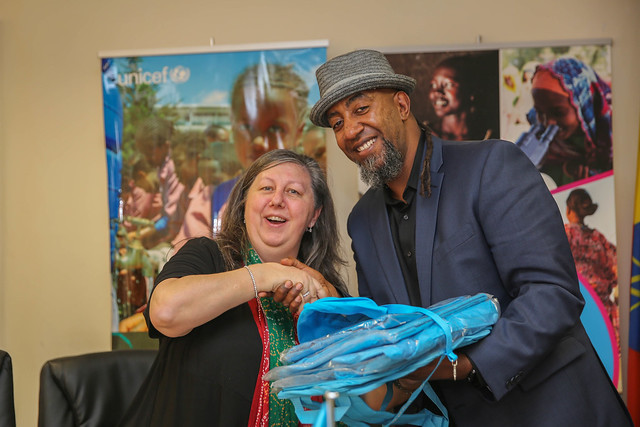 14 October, 2015, Addis Ababa: Today, UNICEF appointed Thomas Gobena (commonly known as Tommy T) as its National Ambassador to Ethiopia at a signing ceremony held in its premises. The ceremony was attended by Ms. Patrizia DiGiovanni, Officer in Charge, UNICEF Ethiopia, members of the media and UNICEF staff. A U.S. Citizen with Ethiopian descent, Tommy moved to Washington D.C. at the age of sixteen, and is a bassist for Gogol Bordello- a Gypsy punk band – since 2006. Tommy T. has been an advocate for UNICEF’s work since 2014 and is keen on empowering youth. Thus, he has participated in a Public Service Announcement (PSA) on HIV/AIDS awareness entitled “your life; your decision” produced by UNICEF in collaboration with the Federal Ministry of Health and UNAIDS, which has been appreciated by the public.

Speaking of his new title as an Ambassador, Tommy said, “I hope I will be an Ambassador who will awaken hope, inspire action, and nurture kindness and respect to all. I hope with all my heart that my modest contribution will be inspiring to as many youth as possible because inspiration  fuels hope.” Patrizia DiGiovanni, Officer in Charge, UNICEF Ethiopia on her part said, “Tommy’s ambassadorship has come at a time when UNICEF Ethiopia is seeking to engage with a wide range of the diaspora groups to get their understanding and support for children’s issues in Ethiopia. Reaching out to this group is critical as they can relay information fast to their communities and have also a strong awareness raising capacity.” 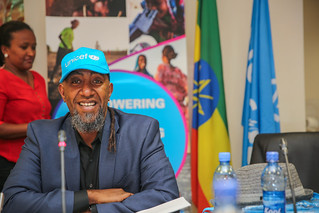 Tommy has visited several youth and sport for development programmes in Addis, Oromia and SNNP regions and has encouraged young people to peruse their dreams. Recently, he had the opportunity to visit a water well drilling UNICEF-supported programme in Dobi kebele (sub-district), 84 km North from Samara in the Afar Region and interacted with beneficiaries.

Globally, Tommy has participated in the UNICEF-led #IMAGINE project, which aims to draw attention to the challenges children face around the world, by allowing people to record their own version of “Imagine”, John Lennon’s iconic song. In addition, Tommy attended the #Imagine launching event together with world renowned celebrities and UNICEF goodwill ambassadors including Katy Perry, Angélique Kidjo and others while celebrating the 25th anniversary of the Convention on the Rights of the Child (CRC@25). See link: http://bit.ly/1jYtjBf

Currently, Tommy is setting up an entertainment company in Ethiopia and is keen to engage further with the public using music to get positive messaging across to the general population in Ethiopia and abroad.

Tommy is following in the footsteps of Aster Awoke, Abelone Melesse and Hannah Godefa as UNICEF National Ambassadors by demonstrating an outstanding commitment and dedication in promoting the rights of women and children’s issues over time.