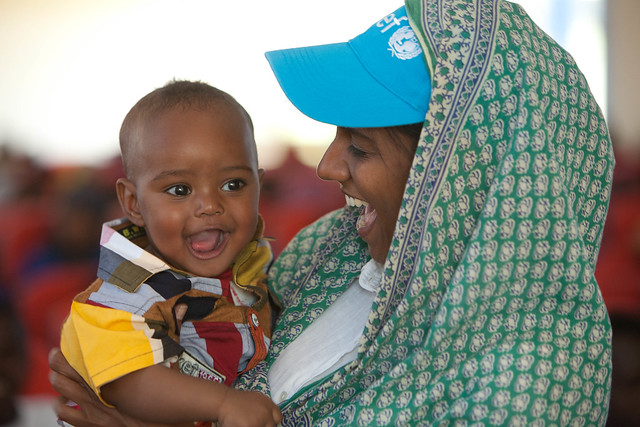 UNICEF was created in 1946, and began its operation in Ethiopia in 1952. UNICEF Ethiopia’s Country Office is located within the UN-Economic Commission for Africa compound in the capital city, Addis Ababa. The Country Office is supported by zonal offices present in Assosa, Bahirdar, Dollo Ado, Gambella, Gode, Hawassa, Jijjiga, Kabri Dahar, Mekelle, Oromia and Semera.UNICEF Ethiopia employs approximately 400 highly-qualified and experienced staff, both international and national professionals.

The purpose of UNICEF’s work is to support the realisation of the rights of every child, especially the most disadvantaged children – victims of war, disasters, extreme poverty, all forms of violence and exploitation. UNICEF is uniquely positioned to perform this role, given its comparative advantages. These include: an explicit mandate based on the widely ratified Convention on the Rights of the Child; proven capacity in multiple sectors; a strong field presence; and a mandate that embraces both long-term development and humanitarian response.

A key principle underpinning UNICEF’s work is equity, whereby all children have an opportunity to survive, develop and reach their full potential, without discrimination, bias or favouritism. A child growing up in Gambella Region, for example, should have the same opportunities to receive a quality education and access health and protection services as a child growing up in Addis Ababa.

There is increasing evidence that a focus on the most disadvantaged and excluded children, families and communities not only accelerates progress towards fulfilment of the rights of all children and reduces disparities but also brings about social and economic growth. In all of its work, UNICEF takes a life-cycle based approach to child development, which recognises key stages in a child’s life as it grows into adulthood, and designs and implements holistic and integrated approaches to health, education and social protection that are appropriate to each of the key life stages.

Important results to which UNICEF Ethiopia, in cooperation with other partners, has contributed include: achievement in reducing under-five mortality by two thirds between 1990 and 2012- the required reduction for meeting the target of Millennium Development Goal 4 (MDG 4)-three years ahead of schedule; meeting MDG 7c by halving the number of people without access to safe water since 1990 – 57 per cent of the population now using safe drinking water; a reduction in neonatal mortality from 37 deaths per 1,000 live births in 2010 to 27 deaths per 1,000 live births in 2014;a reduction in the proportion of stunted children from 58 per cent in 2000 to 40 per cent in 2014; adoption of the National Social Protection Policy and a commitment by the Government of Ethiopia to end Harmful Traditional Practices by 2025 and establishment of Vital Events Registration structures at national level.

Through the Growth and Transformation plan of the Government of Ethiopia, UNICEF as part of the United Nations Country Team will contribute to four pillars of the United Nations Development Assistance Framework (UNDAF): a) the Resilient, Sustainable, and Green Economy, b) Basic Social Services, c) Governance, Participation and Capacity Development and d) Equality and Empowerment, with the goal of supporting the second Growth and Transformation Plan to progressively realize children’s rights within the framework of the Convention on the Rights of the Child and other international commitments.