“I go to visit new mothers seven days after giving birth to give them iron, and it is then I will refer them to hospital if they are suffering from fistula. I referred two women recently,” explains Hebeste Admas, 26, a Health Extension Worker at a local health post in the Bandani Kebele (neighbourhood) of the Dangla Woreda (district) in Amhara, Ethiopia.

Hebeste continues, “Child marriage results in so many other health consequences including miscarriage and stunting of the child. A girl’s uterus may be damaged from intercourse and she will suffer great psychological distress. I have seen all of this.”

Yitayesh Akalu, Expert at the Dangla Women, Children and Youth Affairs Office comments: “The problem of fistula is so huge we have dedicated fistula health centres. Fistula happens mostly to child and adolescent mothers as a result of intense and prolonged labour – their bodies are simply not developed enough to give birth. We have community ambulances so that fistula cases can be treated straight away. A girl will be transported by youth groups carrying her on a bed until they get to an accessible area where the ambulance will collect her.”

Hebeste has been a Health Extension Worker since she was 17, and her role includes teaching community members about the health consequences of child marriage. 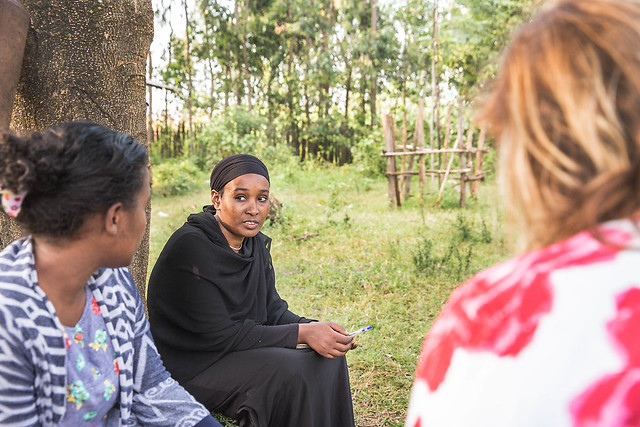 “In my 9 years as a Health Extension Worker I have seen a decline in child marriage as a result of community awareness, and I do believe the practice will stop. I report cases to the police. There is no confidentiality as they are breaking the law. However people hold alternative ceremonies in secret to hide that it is a child marriage – at night or at dawn. Then the girl disappears and the family say she has gone to live with an aunt.”

Hebeste continues: “But local health workers like me know every pregnant woman and the Women’s Development Groups and Health Development Groups who look after the wellbeing of girls and prevent them marrying, operate at the village level. So we know. The development armies report to me and I report cases to the health centre and police.”

Hebeste notes the way girls who are forced to marry are not as able to protect their own health and plan their families. She explains: “There is a real difference between older and younger women who are married. Adult women come to me for family planning services without the knowledge or consent of their husband. Whereas when girls marry as children, they do not understand the consequences of sex, they are not empowered to seek advice, and so they do not come to me.

“I have had parents bring their daughter to me ahead of marriage saying they want contraceptives for her to try and avoid the complications of childbirth. The girl told me she was really scared to be marrying an adult man. I reported them.”