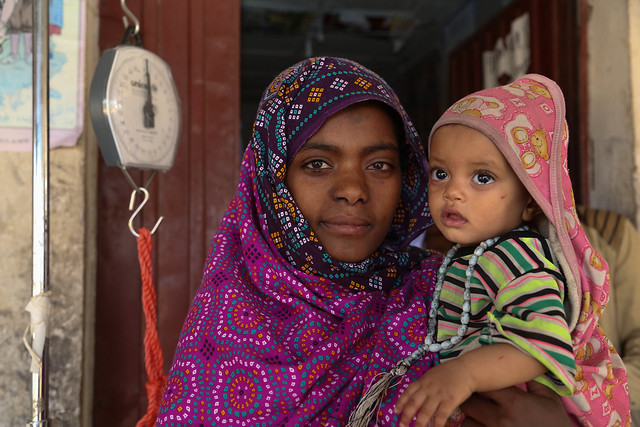 AMHARA REGION, Ethiopia, February 2016 – Moyanesh Almerew, a Health Extension Worker in Arara Kidanemeheret Kebele (sub-district) in Amhara Region can testify to how bad the current drought in Ethiopia is for children. She is one of thousands employed as part of the nationwide Health Extension Programme, a community-based programme bringing basic health services to the doorstep of Ethiopia’s large, rural population. According to Moyanesh, they have had seen many more cases of severe acute malnutrition among children this year as compared to previous years and the cases they are receiving are worse. Among them, six-month-old, Fikir, whom Moyanesh saw during a home visit, stands out.

“You would not believe how thin she was when we first found her,” recounts Moyanesh, “She had never been vaccinated so when we tried to give her the vaccines, it was not possible because she was only skin and bones,” explains Moyanesh. When she was first brought to the Arara Kidanemeheret Health Post, the child weighed just 4.5 kg and the measurement of her mid-upper arm circumference – the criteria for identifying severe malnutrition – was 10.5 cm. She was severely acutely malnourished.

Thankfully, after receiving treatment, Fikir has gained 2kg after treatment, which included medicine and therapeutic food for several weeks, and her mid-upper arm circumference grew to 11.8 cm, which puts her in the moderately acutely malnourished range. She continues to receive outpatient treatment at the health post.

Moderately acutely malnourished children are enrolled in the World Food Programme-supported Targeted Supplementary Feeding programme through which they receive fortified blended food and vegetable oil for six months to aid their nutritional recovery. Both this and the UNICEF-supported treatment for severe acute malnutrition are routine responses which are all the more critical in a crisis.

Seven-month-old Mastewal is another child who has been treated at the Arara Kidanemeheret Health Post. Her mother, Weynitu, says that the drought has taken quite a toll on her family, especially on Mastewal. The child was extremely emaciated before receiving treatment for severe acute malnutrition. Weynitu walks for more than two hours over steep hilly ground to get to the health post for Mastewal’s treatment but she says it is worth all the hardship since her daughter has shown a lot of progress in the last few of months.

To Moyanesh, it is a relief to see the wonders that therapeutic food treatment does for the children. “I doubt that some of these children would have survived if they didn’t receive this treatment,” she says.

Across the country, 458,000 children are expected to need treatment for severe acute malnutrition in 2016. More broadly, 10.2 million people, 6 million of them children, are in need of emergency food assistance due to the drought. UNICEF, the Nutrition sector lead agency, continues to coordinate the nutrition emergency response. With the support of donors, UNICEF provides supplies for the management of severe acute malnutrition and supports the treatment of malnourished children through the community-based management of acute malnutrition, along with training, quality assurance and monitoring of the nutrition emergency response. UNICEF is also supporting efforts to provide drought-affected communities with access to clean water and health services to address major causes of child illnesses and deaths that have been exacerbated by the drought.

To continue nutrition emergency response activities over the coming months, additional funds of US$5 million are needed, subject to needs-based revisions. A further US$ 42 million is needed over the next four years to strengthen nutrition services and build resilience to future shocks among communities that are worst-affected by the drought.

3 thoughts on “Saving a child too thin to be vaccinated”