US$612.4 million urgently needed to address food and non-food needs for 9.7million people

Addis Ababa, 12 August 2016: On 12 August, the Government of Ethiopia officially launched the revision of the joint-Government and partners’ Humanitarian Requirements Document (HRD) for the second half of 2016. The revised HRD seeks US$612.4 million to help 9.7 million people with emergency food and non-food assistance.

“The findings of the comprehensive belg assessment show changes in the humanitarian context that require immediate action. While the overall response strategy remains the same, we need to respond to address increased needs in some areas,” noted Commissioner Ato Mitiku Kassa, Head of the National Disaster Risk Management Commission (NDRMC). “Thanks to the collaboration between the Government and humanitarian partners, we have done a lot this year. We need to sustain the generous support from the international community in the second half of 2016.”

Ethiopia continues to be affected by drought, exacerbated by the strongest El-Niño on record, which significantly eroded coping capacities. Some regions experienced flooding with unusually heavy belg spring rains in April and May 2016, causing temporary displacement and a surge in disease outbreaks. At the same time, some areas did not receive sufficient rainfall and people still do not have adequate access to water, resulting in continued food and nutrition needs that requires additional health and water response. The Government-led inter-agency belg seasonal assessment, undertaken at the end of June, allowed for a timely revision of the 2016 HRD to ensure well-prioritized response until the end of the year.

“The Government of Ethiopia maintains its very strong and decisive leadership in responding to this crisis and has helped avoid what could have been a humanitarian catastrophe’’ stated Ms. Gillian Mellsop, the acting Humanitarian Coordinator. “As was highlighted at the side-event at the World Humanitarian Summit in May, Ethiopia’s response model is an excellent example of how preparation, disaster risk management and response prioritization can mitigate the impact of natural disasters,” added Ms. Mellsop.

“Nevertheless, despite marked achievements earlier this year, the humanitarian situation in Ethiopia remains critical. With a combination of drought, which significantly weakened coping capacities, and extensive flooding that has caused displacement, disease outbreaks and the disruption of basic public services, we must maintain our scaled-up response,” Ms. Mellsop stressed.

“We should not underestimate our achievements this year, especially considering that we have received more than $1 billion in funding so far” Mr. Paul Handley, Head of Office for OCHA Ethiopia, emphasized. “However, we need to scale up and prioritize our response for the rest of the year to provide assistance to the most vulnerable. It is vital that the international community continues to support the Government to ensure that we do not lose the positive momentum we have gained towards ending the humanitarian crisis.”

UNICEF’s response in pictures (Click on the picture for more) 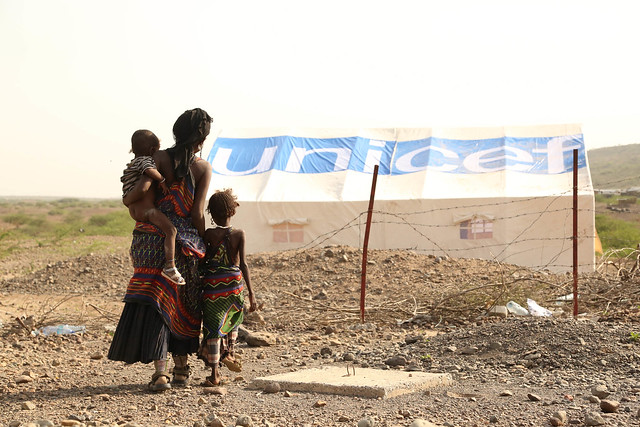