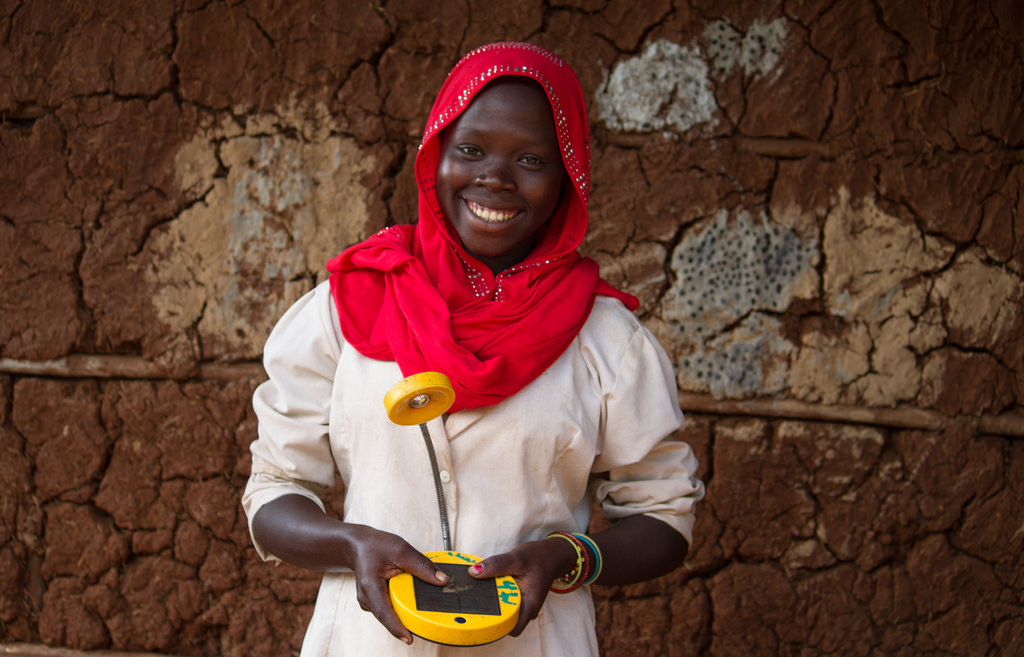 BASHABUDA, BENISHAGUL GUMUZ, ETHIOPIA 28 September 2016 – Three years ago, when Selwa Mensur was a fifth grader, something arrived in her school which immediately changed her life. Solar lamps were distributed to help students with their education.

In rural village of Bashabuda in the Benishagul-Gumuz region of Ethiopia, electricity is considered as luxury. This means children, especially girls, who need to support their families after school do not have the chance to study at night. “I am the first girl child in my family. I have to support my mother in the house after school until it gets dark”, says Salwa explaining her usual routine. “When I got the solar lamps, I was able to review those topics, which were difficult to understand, before I went to sleep”.

Today, Selwa, 17, is enjoying her summer break before she starts class in the eighth grade as a senior in her elementary school. It is indeed a great achievement for her. Many girls in Selwa’s village have little chance in pursuing with their education. They have to prove themselves to their parents who rather prefer to send them to marriage than to school at early age.

Like in many rural settings in Ethiopia, Bashabuda’s children, especially girls, spent much of their after-school time helping their families at home and in the farm. They cannot study at night because there is no light. This has negatively impacted their school performance. Failing classes and dropping out was quite common. When girls drop out, their chance of returning to school is very slim. Many parents in the village often see marriage as the best alternative for their daughters’ future.

The solar lamps were supplied by UNICEF with the support it got from the IKEA foundation. A total of 12,272 easy to use pieces were distributed in three woredas (districts) in the Benishangul-Gumuz region including Bashabuda village- which received 350 of them.
When the lamps arrived, UNICEF and the regional education bureau representatives discussed with the school community on how to make a fair distribution of the limited amount of lamps allocated to the village.

Priority has been given to girls who are in grade five and above. This is because students in such grades do more homework than those students in the lower classes.

“We used to make a local torch [made of a stick soaked into a wood resin], so that our children study at night. But it only burns for short time”, says Mussa Tufala, who is a father and member of the school Parent Teacher Association (PTA). “But this lamp brought light to the whole family”.

The lamps also helped those siblings in the house to study with their brothers and sisters who have got the lamps.

The solar lamps lights up the education of Bashabuda elementary school children for last three years. It has been observed that those students who received the lamps showed encouraging improvement in their education.

The school principal Semaegizer mentions that the number of girl students who rank 1st to 3rd in grades between five to seven increased in the past three years. He owes this success partly to these solar powered lamps.

Though the solar lamps brought visible difference in the performance of young students in Bashabuda for the past three years, a new challenge is making the students worried again.

Ali Imam was an average student. After he received the solar lamps, he started to excel in his class. But like many solar lamp recipient students, he is worried about its conditions. His three year old lamp keeps losing power and the on/off button is also malfunctioning. So he pays 40 birr (US$1.9) each time he took it to a local technician; too expensive to him and too expensive for his family. Therefore, Ali need a replacement so that he can prepare better for the national exam that he is expected to take before he joins high school. Ali also urges if there are more lamps available to his fellow school children who did not get the chance to have one before.

For rural children in Ethiopia whose only study time is at night, solar lamps are treasured properties. The three hours lamplight the tiny instruments provide seems short but they brighten the future of female students like Selwa much longer than that. “I want to be a teacher when I finish high school,” says Selwa “I came this far with the support of my teachers. They’re my role models and I want to be like them.”

Selwa’s future in education is taking shape. She believes girls like her will only succeeded when they are supported to study at home. And simple technology like solar lamps are indeed an integral part of that support as they provide the much needed light after dark.