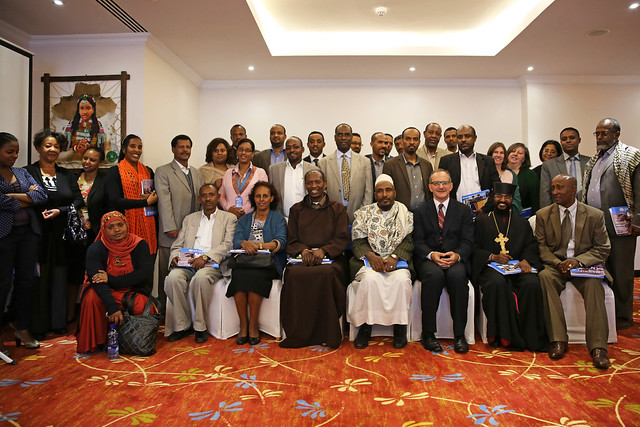 Ethiopia has come a long way, in development terms, since it adopted the Millennium Development Goals (MDGs) as part of its national agenda. Remarkable achievements have been registered within various social wellbeing parameters. Most notably, the country has achieved MDG 4 – to reduce child mortality by two thirds – three years ahead of schedule. A lot remains to be done, however, particularly in reaching the most disadvantaged children – 3 million are out of school, 40 percent of under-fives are malnourished, only 7 percent of births are formally registered, less than one-third of pregnant women deliver in health facilities, key vaccinations are achieving less than 70 percent coverage and a high number of girls are being exposed to a variety of harmful traditional practices.

While Ethiopia is on track to achieving the majority of MDGs before the 2015 deadline, the involvement of stakeholders, such as religious leaders, is crucial. This is particularly true in reaching the most disadvantaged communities. In line with this premise, UNICEF held a consultative workshop with religious leaders on Monday, 23 June 2014, in Addis Ababa. The half-day workshop targeted the creation of shared values and common ground in bringing a more prosperous future to the children of Ethiopia.

“We aim today to begin a new conversation, enabling us to work together towards a common goal,” said Dr Peter Salama, UNICEF Representative to Ethiopia, whilst opening the workshop, further emphasising that religious institutions are able to reach out to communities at a grassroots level more effectively than any other social network. They are also instrumental in influencing positive behaviour and social norms, and thus working with these institutions is not considered as a second option. Dr. Salama spoke of the need to scale up UNICEF’s work with religious leaders on what they are uniquely positioned to achieve among their millions of followers – mobilisation for action in the wellbeing of children.

After a brief presentation of UNICEF’s guide on partnerships with religious communities and the situation of children in Ethiopia, the workshop continued with discussions centred around experiences and priority intervention areas.

The civic engagement of religious institutions in Ethiopia is commendable.  For instance, the experience shared by the Ethiopian Orthodox Church revealed that the church’s 42-year-old development wing has been actively involved in numerous developmental activities placing women and children at the centre of the issue. The Ethiopian Orthodox Church Development and Inter-Church Aid Commission has developed declarations on gender based violence and harmful traditional practices, as well as safe motherhood.  What was interesting for participants was the church’s adoption of a “Development Bible”, which contains 360 daily teachings, incorporating over 45 contextualised messages. These include a focus on gender equality, Female Genital Mutilation/Cutting (FGM/C), maternal health, HIV/AIDS and Harmful Traditional Practices (HTPs).

Similarly, the Ethiopian Muslim Supreme Council shared information of their work towards a “fatwa” (declaration) against FGM/C. A representative from the Council recounted how talking about FGM/C had been a taboo for religious fathers of previous years. However, leaders are now speaking out against the practice and bringing change in project areas. The Council also underlined the need to scale up the intervention, in order to stop the practice altogether. The experience of the Ethiopian Catholic Church in the development of the Child Protection Policy and the concept of ‘serving the whole person’ expressed by the Ethiopian Evangelical Church, Mekanyesus, and the Kale Hiwot Church, was also shared with participants.

Three umbrella Forums – the Ethiopian Interfaith Forum for Development Dialogue and Action, the Inter-Religious Council Ethiopia and the Evangelical Church Fellowship Ethiopia – also shared their experiences in mobilising member institutions in various projects. These included maternal and child health, peace building and HIV prevention. The efforts to mainstream the UN Convention on the Rights of the Child (CRC) and HTPs in theological schools was also highlighted.

In the past, UNICEF and other organisations predominantly worked with the development wing of religious institutions. However, it is recognised that this undermines the significant return of actively engaging in the spiritual wings. The spiritual wing reaches over 97% of the nation’s population through various religious structures, whilst the regional presence and coverage of development wings is dependent upon resources.

UNICEF is keen to work with both the spiritual and development wings of the major religious institutions and umbrella forums through a long term strategic partnership. UNICEF is also ready to provide technical support, policy advice and capacity building on the key child related interventions conducted by these institutions. The religious leaders have also reaffirmed their commitment to working with UNICEF.

Before the close of the workshop, participants agreed to form a small working group to develop the partnership framework.