by Monica Martinez and Nadine Tatge

Gambella, Ethiopia, 22 April 2015 – Nyadiet is a 50 year old South Sudanese woman who came to Kule refugee camp two years ago when her life was at risk due to the fighting in her country.

She came on her own and the whereabouts of the rest of her family are unknown. Because Nyadiet is on her own, she volunteered to become part of the foster family scheme in Kule camp, implemented by Plan International with support from UNICEF.

For five months now, Nyadiet has been fostering four siblings that also came from South Sudan. The oldest of the four siblings is a 13 year old girl called Nygua who found the bravery to bring her three younger brothers (8, 7 and 5 years old) across the border from South Sudan to Ethiopia.

During the fighting in South Sudan, Nygua and her siblings were separated from their parents and she has not heard anything from them since they left their home. The four children are thankful for Nyadiet’s care and support and they see her as their grandmother.

Nygua and her siblings are four of over 18,000 separated and unaccompanied children currently living in Gambella refugee camps. UNICEF is supporting UNHCR and other implementing partners to identify and document cases of children entering the camps and restoring family links that shall eventually lead to reunification. As an interim solution for children affected by family separation, alternative care through foster families and kinship care is being provided. 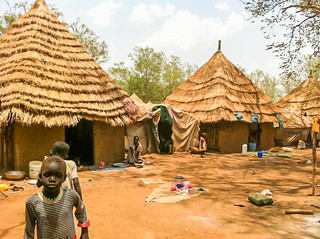 Social workers attending to the children have been trained in psychosocial support. After the training, Simon, one of the social workers, says he now feels confident on how to identify children that might need further specialized services.

He analyses the interaction of children in the child-friendly spaces and especially looks out for children who seem to be isolated from the group of peers. Simon is from South Sudan himself, and he tries to keep the cultural roots and traditions of the South Sudanese refugees alive by performing traditional folklore, singing songs and telling stories in the child-friendly spaces (CFS).

These activities are crucial for the implementation of a holistic, and culturally adjusted psychosocial intervention. Psychsocial interventions provided in the CFS are tailored to the specific needs of children. Factors such as age, sex, and the different wellbeing concerns that an individual might have, are taken into account in order to provide the appropriate response.

Nygua is attending school in the camp and sometimes she goes to the activities in the child-friendly space. In collaboration with the social workers, Nyadiet is supporting efforts to find Nygua’s parents. Plan International has already initiated the family tracing process and is working closely with the Ethiopia Red Cross Society and the International Committee of the Red Cross.

Nyadiet said that she is happy with the support she is receiving from the social workers, who visit her regularly in her house in Kule. The family has basic commodities, but some items like mosquito nets and soap are always scarce and she worries that there is never enough food in the house to properly feed the four fostered siblings. Nyadiet adds, “I try my best to provide clothes for the four children but also these are scarce sometimes.”

When asked about her future, Nyagua says: “I wish to find our parents or at least to hear that they are fine and safe.”