Butajira, 2 April 2014: Around fifteen journalists from eleven media houses visited Butajira hospital and health center to witness firsthand the facilities for mothers and new-borns there.

The media visit was organized by the Federal Ministry of Health, European Union and UNICEF to show the commendable services provided by Butajira hospital and health centre ahead of the high level launch of the ‘Enhancing Skilled Delivery in Ethiopia’ (ESDE) which was made possible with EU’s generous €40.2 million grant.

New mother Aster Kebede’s face is filled with grace holding her new baby girl already named Etenesh Gobeza. After an hour of delivery, she has immediately started breast-feeding her child sitting comfortably on the hospital bed. It took her a day to come to the hospital from the neighboring Mareko woreda (district) with her mother Fichage Arega. Now, both of them are proudly sitting close to each other admiring the newly born child and grandchild in relief.

“I am highly content with the service provided here at the hospital. The staff were really kind to me and I had a smooth delivery. I am also grateful that such service is offered for free.” said Aster.

In Ethiopia the most critical period of care for maternal and neonatal mortality reduction (skilled birth attendance) has remained stagnant for the past two decades with only 29 per cent of mothers accessing this essential care. In addition, despite the improvements in reducing under 5 mortality rates, neonatal mortality rate has also remained stagnant showing no significant reduction from 39 in the 2005 to 37 in 2011.

“Both the quality and quantity of services have increased in the hospital due to the commitment and motivation of the hospital management and its staff to prevent any death of mothers and new-borns” said Andualem Mengistu, Manager of the hospital.

According to Andualem, the range of mothers who deliver at the hospital has increased from 10-15 up to 80-90 mothers per week at present. This significant increase is due to the introduction of free service for mothers who deliver at the hospital, increase in the number of midwives on duty programme and early referral system from the Health Center. In addition, the hospital implements Maternal Death Surveillance and Response (MDSR) and uses volunteers from Voluntary Services Organization (VSO) to fill the staffing and skill gap.

“Giving birth should be a time of happiness and celebration for mothers and not a time of sorrow. And newborns are not predestined to die” said Dr. Asheber Gaym, Health Specialist at UNICEF. “We need to make all our efforts to stop the unnecessary death of mothers and new-born in the country by closely working with the Government and partners” he added.

Ali Abdella, deputy head of the woreda health unit indicates that, their main objective is to create demand so that mothers deliver at a health facility and not at home. The maternal mortality rate in the city used to be 67 deaths per 10,000 in 2010 and now it has gone down to 6 deaths per 10,000 which is a significant achievement.

According to Ethiopian Demographic and Health Survey (EDHS) 2011, Ethiopia has one of the highest maternal mortality ratios in the world estimated at 676 maternal deaths per 100,000 live births far from the MDG target of 267.

“We are now aiming at quality service and HDF (Home Delivery Free) community.” he stresses.

Translation of paragraphs from stories by journalists that took part in the media visit are posted here: [With a link to the Amharic story]

Hospitals can solve Maternal health and newborn deaths when they have the necessary  equipments and sustainable supply. To equip new and old hospitals with the necessary equipments to sustain the supply, the European Union  has donated 40 million Euros through a project implemented by Ministry of Health and UNICEF. All health sectors will benefit from this three year project Read more.

“Many newborn and maternal lives were saved because of this hospital” says Fetiya “The service is for free, so all mothers should come to the hospital and save the life of their children and themselves” Fetiya conveys her message. Read more

UNICEF and Ethiopian Ministry of Health will work together to achieve MDG5, reduce maternal and newborn deaths , by implementing a new 40 million euro project donated by the European Union. Read more 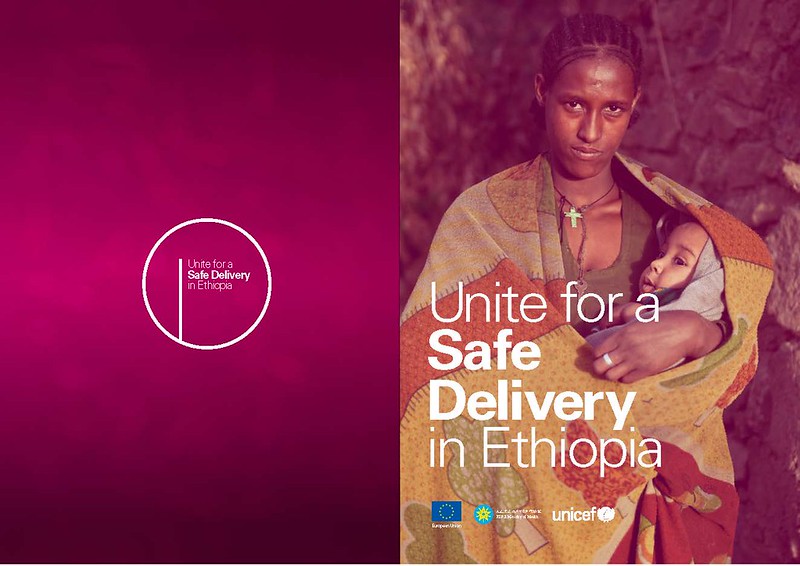 WHAT: High Level Launch of the “Enhancing Skilled Delivery in Ethiopia (ESDE)” project with a €40.2 million grant by the European Union (EU) to Federal Ministry of Health and UNICEF to improve maternal and new-born health.

WHY: Ethiopia has made remarkable progress in promoting primary health care service facilities through the Health Extension Programme which led to the reduction of major public health challenges including tuberculosis, malaria and child mortality.  This in turn has contributed greatly to the achievement of MDG 4 of reducing child mortality three years ahead of the 2015 deadline. MDG 6 of halting the spread of HIV/AIDS, Malaria and TB are also well on track.

Despite this improved trends, MDG 5 – Improvement of maternal health – remains the only MDG goal that is not on track as we approach 2015 and now it the time to put it on the spotlight.

WHAT: Media visit to health facilities to demonstrate the partnership of the Federal Ministry of Health, European Union and UNICEF in maternal and new born health- ahead of the high level launch of European Union’s donation of €40 million for Enhancing Skilled Delivery in Ethiopia (ESDE) Project.

WHY: According to EDHS 2011, Ethiopia has one of the highest maternal mortality ratio in the world estimated at 676 maternal deaths per 100,000 live births far from the MDG target of 267.

The most critical period of care for maternal and neonatal mortality reduction is skilled birth attendance. However, availability and uptake of this service had remained stagnant until recently.

In addition, despite the improvements in reducing under 5 mortality rates, neonatal mortality rate has also remained stagnant showing no significant reduction from 39 in the 2005 to 37 in 2011. Therefore, maternal and neonate health are now the top priorities in everyone’s agenda.

Accordingly, Butajira Hospital and Health Center have been selected as model facilities that give full maternity service and continuum of care including neonatal care and a coordinated referral system for this visit.

This media visit is organized by Federal Ministry of Health, European Union and UNICEF.

A media pack regarding the sites will be prepared and shared with you . A resource persons will be on board to respond to your queries.

Please confirm your attendance starting from today up to Monday for logistics purpose.