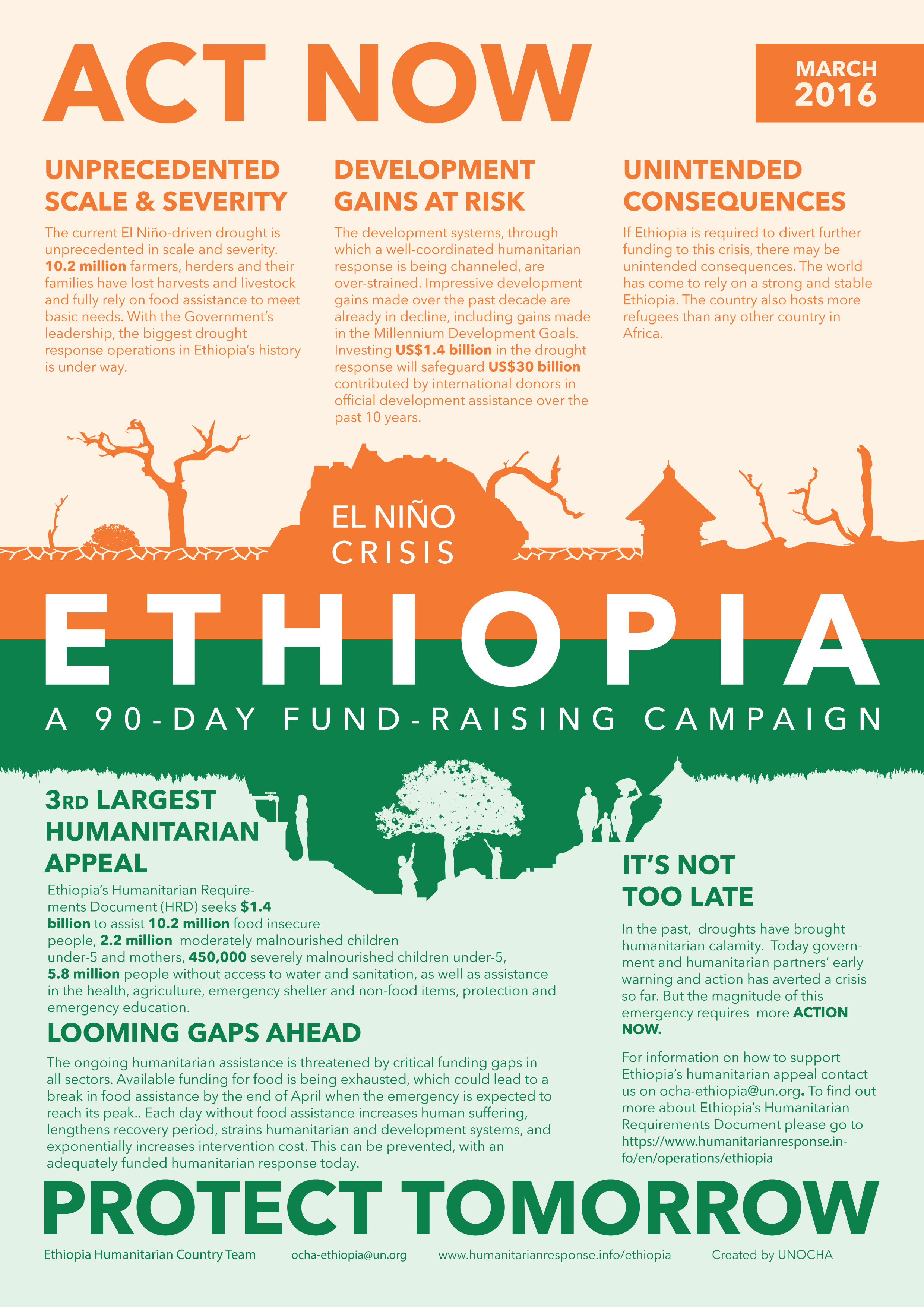 (Addis Ababa, 23 March 2016):  Humanitarian partners today launched a 90-day campaign to raise awareness on the urgent need for an additional funding for the drought crisis in Ethiopia to address the humanitarian resource gap.

“Ethiopia is currently contending with one of the most serious climatic shocks in recorded history with ten million people facing lost harvests and livestock as well as severe water shortages and health risks,” said Ms. Ahunna Eziakonwa-Onuchie, UN Humanitarian Coordinator for Ethiopia.  “We are launching this campaign to advocate for increased funding commensurate with the scale and severity of this crisis.’

While Ethiopia’s 2016 US$1.4 billion appeal has received over US$758 million from the Ethiopian government and the international community, significant life-saving gaps remain across all sectors. The four months lead time to get relief commodities to people in need means that action is required now.

Commending the Ethiopian government, the UN Humanitarian Coordinator noted that the government is one of the largest financial contributors to the crisis so far and also leads in the coordination of a complex inter-sector response, which uses government systems and relies on national capacity.

`We are indeed thankful and encouraged by the donors who have stepped up to support Ethiopia in this drought crisis,’ said the Commissioner Mitiku Kassa, National Disaster Risk Management Commission. `Some of these donors joined the Government to respond at the onset of the crisis in October last year. They did so knowing that it costs three times more to treat severe malnutrition than to provide the food and other associated support that might have prevented that child’s descent into severe acute malnutrition.”

Noting that the international community stands to gain much from supporting Ethiopia in the drought response, the Humanitarian Coordinator observed that drought response is not just about saving lives  it is about protecting development gains – gains which the Government and its development partners have worked tirelessly to build up over decades.

“The Government’s vision for development, enshrined in the second Growth and Transformation Plan, promises to steer Ethiopia further down its already remarkable path of progress,” said Ms. Eziakonwa-Onuchie. “We need to rally urgently to protect the development gains of Ethiopia over the past decade and ensure the country remains on its remarkable development trajectory. Urgent and substantial investment in the humanitarian crisis response this year is the only way to ensure this and we must act now.”

NEW YORK, 5 February 2016 – “FGM is a violent practice, scarring girls for life — endangering their health, depriving them of their rights, and denying them the chance to reach their full potential.

“FGM is widespread.  It is a global problem that goes well beyond Africa and the Middle East, where the practice has been most prevalent — affecting communities in Asia, Australia, Europe, North and South America.  And the number of girls and women at risk will only get larger if current population trends continue, wiping out hard-won gains.

“FGM is discrimination.  It both reflects and reinforces the discrimination against women and girls, perpetuating a vicious cycle that is detrimental to development and to our progress as a human family.

“FGM must end. In September at the United Nations Sustainable Development Summit, 193 nations unanimously agreed to a new global target of eliminating FGM by 2030.  This recognition that FGM is a global concern is a critical milestone.

“But the recognition, while important, is not enough.  To protect the wellbeing and dignity of every girl, we need to take responsibility as a global community for ending FGM.

“That means we need to learn more — improving our data collection to measure the full extent of the practice — and do more. We need to encourage more communities and families to abandon FGM.  We need to work with larger numbers of medical communities — including traditional and medical professionals — persuading them to refuse to perform or support FGM.  We need to support more women and girls who have undergone the harmful practice and provide them with services and help to overcome the trauma they have suffered. And we need to support and empower girls around the world to make their voices heard and call out to put an end to FGM.

“All of us must join in this call. There simply is no place for FGM in the future we are striving to create –  a future where every girl will grow up able to experience her inherent dignity, human rights and equality by 2030.

In Ethiopia, despite a steady reduction in FGM/C nationally over the past decade, still 23 per cent (nearly one out of four) girls between the ages of 0 to 14 undergo this practice (Welfare Monitoring Survey (WMS) 2011). According to the same source, FGM/C is practiced across all regions in Ethiopia with varying degree with the prevalence in Amhara (47 per cent), Benshangul-Gumuz (24 per cent) and Tigray (22 per cent), Oromia (17 per cent) and Harari (14 per cent). The regions with the highest prevalence rate are Somali (70 per cent) and Afar (60 per cent). The impact of FGM/C in these two regions is severe as the two regions practice the worst form of FGM/C which involves total elimination of the external female genitalia and stitching, just leaving a small opening for urination.

The Government of Ethiopia has taken strategic and programmatic measures to eliminate FGM/C. Some of the key actions include; endorsement of the National Strategy and Action Plan on Harmful Traditional Practices against Women and Children and communication strategy for social norm change and establishment of the National Alliance to End Child Marriage and FGM/C. Moreover, the Government has shown a ground-breaking commitment to end FGM/C and child marriage by the year 2025 at the London Girls’ Summit and reinforced by setting a target to reduce the practice to 0.5 per cent in the Growth and Transformation Plan II (GTP II).

UNICEF is supporting the Government of Ethiopia in developing a roadmap which defines the long term strategic and programme interventions and the role of different actors, strengthening the National Alliance through supporting the establishment of functional secretariat, enriching the Ethiopian Demographic and Health Survey (EDHS) module to include better data and consensus building sessions with religious leaders in collaboration with UNFPA and other Alliance members.

UNICEF and UNFPA have been working hand in hand for many areas in Ethiopia for the abandonment of FGM/C. One of the exemplary programme that can be sited is the joint programme on the abandonment of Female Genital Mutilation/Cutting in Afar Region. The programme has a social mobilization component which includes; facilitated community dialogue, working with religious and clan leaders, youth dialogue targeting in and out of school girls and a care component which involves tracking cases of complications with linkage to health facilities. Also, improving enforcement of the law through increasing legal literacy, strengthening special units in the law enforcement bodies for better reporting and management of cases. The programme has recorded pronounced success in facilitating declaration of abandonment of the practice in 6 districts in Afar Region, and eventually expanding to other districts in Afar and other regions.

The signing ceremony of Ethiopian Fiscal Year 2007 Work Plans with government was held on Monday 30th June 2014 at the Intercontinental Hotel in Addis Ababa, facilitated by the Ministry of Finance and Economic Development (MoFED) of the Federal Democratic Republic of Ethiopia.

Speaking during the signing ceremony, Ato Ahmed Shide, State Minister of Finance and Economic Development said that “the support rendered through the AWPs will be instrumental for the successful implementation of the current Growth and Transformation Plan (GTP) of the Government as well as the next generation of the plan.” The Resident Coordinator of the UN Country Team in Ethiopia, Mr. Eugene Owusu, affirmed speaking on behalf of the UN Agencies that efforts and collaborations will be sustained at a continued scale during the coming years of the next UNDAF period.

Regional Implementing Partners and UN agencies including UNFPA, UNDP, UN Women, ILO and WFP were present as signatories.  Annual Working Plans (AWP) are prepared every two year following the Ethiopian Fiscal Year.  The preparation process starts in early March and follows a consultative approach at the regional and federal level.