Addis Ababa, Gonder, 17 September 2015 – UNICEF Ethiopia, in partnership with the Amhara Bureau of Women Children and Youth Affairs (BoWCYA), the Gonder City Administration Culture, Tourism and Sport Department and the Great Ethiopian Run, are organising a mass participation 5 km race in Gonder on Sunday 20 September 2015, and in Samara on 4 October 2015, to promote Girls’ Empowerment.

A total of 5,000 adults and 1,250 children are expected to participate in the running events, while over 10,000 thousand spectators are expected to attend the event and the messaging. Besides, two community outreach programmes are planned in both locations and expect to reach thousands. In addition, a photo and art exhibition and media roundtable discussion will take place on the eve of the race. 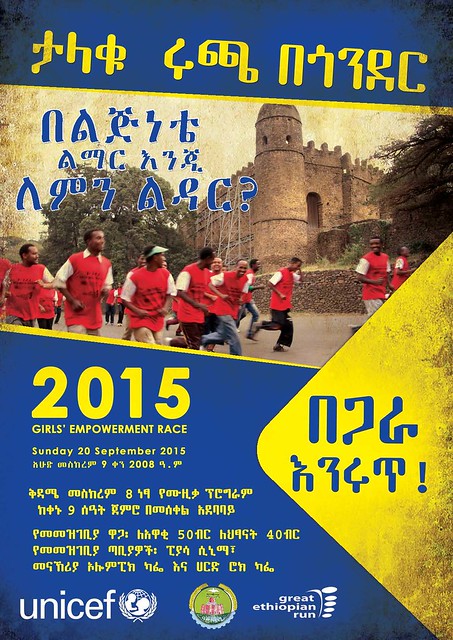 “UNICEF strongly believes that by 2025, Ethiopia will no longer have cases of child marriage, but this will only happen if we all work together – the government, civil society, religious and community leaders, women, men, boys and the girls themselves,” said Gillian Mellsop, UNICEF Representative to Ethiopia.

The event will be attended by high-level government dignitaries, representatives from the UN, NGOs, CSOs and members of the media. In addition, Abelone Melesse, UNICEF National Ambassador to Ethiopia, and renowned artists and sport personalities including Haregwoine Assefa and athlete Gebeyaneshe Ayele respectively (winner of the 15 km Dasani Road Race in Addis Ababa in June and winner of Millennium half marathon in Accra Ghana two weeks ago) will be attending the activities in Gonder to support the messaging around Girls’ Empowerment.

Partnering with the Great Ethiopian Run, the UN in Ethiopia promotes the importance of women empowerment during the 2014 Great Ethiopian Run in which 40,000 people have participated. The annual running carnival is Africa’s biggest 10km race and it continues to attract more people around the world year after year.

Representing the UN, the UN Resident Coordinator in Ethiopia, Mr Eugene Owusu opened the 2014 race together with H.E. Abadula Gemeda, Speaker of the House of Peoples’ Representatives of the Federal Democratic Republic of Ethiopia and other high ranking officials. UN Heads of Agencies and staff have also participated in the race.

This year, the lead message of the race “empower women, empower a nation” comes at a critical time when Ethiopia is preparing to report its remarkable achievements in meeting most of the Millennium Development Goals (MDGs).

The empowerment of women is a smart economics to achieve better economic growth. Sustainable economic development will only be achieved when the political, social, economic and health status of women is improved. Women empowerment is also about the elimination of all kinds of violence against them, and advancing gender equality and equity.

While it becomes apparent that Ethiopia is on track towards achieving many of the MDGs, those targets that are still lagging behind are the ones to do with women and girls namely, MDG 3 on women’s empowerment and MDG 5 of improving maternal mortality. It is therefore timely to call on everyone’s attention and seek the commitment of all towards the fulfilment of women’s empowerment by protecting their right to have access to opportunities and resources within and outside of their homes.