23 March 2015, ADDIS ABABA: Today, the Government of Ethiopia announced a remarkable achievement in the Water Supply, Sanitation and Hygiene (WASH) sector as it met Target 10 of the MDG 7c  for access to drinking water supply. The announcement was made in the presence of H.E Dr Mulatu Teshome, President of the Federal Democratic Republic of Ethiopia, H.E Engineer Wondimu Tekle, State Minister on behalf of His Excellency the Minister Ato Alemayehu Tegenu, Ministry of Water, Irrigation and Energy, Senior Government Officials, Ambassadors, UN representatives, WASH partners and members of the media.

Dr. Mulatu Teshome, President of the Federal Democratic Republic of Ethiopia on the occasion said. “I would like to congratulate you of this great achievement of meeting the Water Supply MDG target and ensure you of the commitment of Ethiopian Government to make realistic its responsibility of providing access to safe water supply and sanitation services at appropriate service level to all its citizens. I call upon all of you to continue joining hands with the Government on reaching to the unreached”. 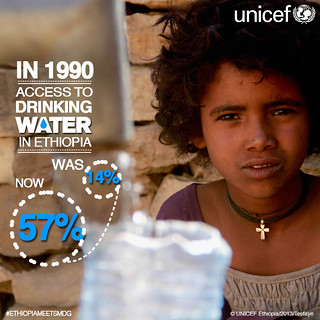 The 2015 assessment report by the UNICEF/WHO Global Joint Monitoring Programme for Water and Sanitation (JMP) indicates that Ethiopia has met the target of 57 per cent[1] of the population using safe drinking water and has attained the target by halving the number of people without access to safe water since 1990.

H.E Engineer Wondimu Tekle, State Minister on behalf of His Excellency Ato Alemayehu Tegenu, Minister, Ministry of Water, Irrigation and Energy said, “Thanks to the great leadership of the government, the diligent effort of WASH actors in particular and Ethiopian communities at large for reaching the have-nots in water supply; the country has achieved MDG 7c target”.

“Today’s event represents a great milestone to us, development partners, civil society, NGO, bilateral, multilateral, public and private sector professionals as we have joined hands to make this achievement a reality.  It is also a historic moment, where Ethiopia demonstrates its political commitment to resolving challenges in the Water and Sanitation Sector,” he added.

Ethiopia has embarked on an ambitious Growth and Transformation Plan (GTP) which placed water supply at the core of all future development agenda. The Government’s heavy investment in the Millennium Development Goal (MDG) fund combined with increased donor contribution enabled the rapid acceleration of water supply coverage in many parts of the country. In addition, Ethiopia has developed a ONEWASH programme designed to ensure universal access to WASH services by 2015. The plan has a budget of US$ 2.4 billion and involves the collective contribution of public, private, NGO and donor investments.

Ms Leila Pakkala, UNICEF Regional Director, Eastern and Southern Africa, speaking on behalf of the Joint Monitoring Programme said, “In 1990 only 6 million people had access safe water. Today, over 55 million people access clean and safe water. The progress that has been made has been impressive, to say the least. But we know that the progress we are celebrating today comes as a result of many years of consistent investment, time and resources at all levels. It has not been an easy achievement”.

Accordingly to the JMP, the total population reached with safe water between 1990 and 2015 is 48 million. There are still 42 million Ethiopians without access to safe water.  Of the 42 million Ethiopians who are not using improved water supplies, an estimated 33 million people are residing in rural areas and peri urban communities and 9 million are living within towns and cities.


SOMALI REGION– Yahas Jamal is a village located 20 kilometres from the town of Gode, its residents live along the banks of Shebelle River. Although the village is situated close to the river, fetching water is a hazardous task requiring the person to risk attack from basking crocodiles. It is because of these crocodiles that the village got the name Yahas (meaning crocodile in Somali). Fortunately, UNICEF, through the Development Regional States (DRS) Joint-UN Programme, has started constructing river intakes in Yahas Jamal and Sankabar villages to improve safe access to water.

Fartun Hassan, 25, has four children. Besides her household chores she supports her husband through farming and looking after cattle. Every day she undertakes a two-hour journey to reach the river to bring water back to her family. “Luckily I have two donkeys so I only go once a day to fetch water. I bring four jerry cans and it is enough for the day. I know people who have been eaten by crocodiles and most people have lost sheep and goats. I am scared every time I go to the river,” she says. “When they finish this water project, I hear that we will have clean water in the community and our children will not get sick. I wish that it will be completed soon,” she says. Istahil Sohane, 28, has four children. She needs to go the river twice a day because she only has one donkey. “I am eagerly waiting for the river project to finish so I do not have to go to the river twice in one day, which is very tiresome. I cannot send my children sometimes when I am tired because I worry the crocodiles will eat them. Better me than them.” Getting water is costly for those who do not have the means to truck water. At the moment people are paying between 10 to 20 USD per month. When finished, the Yahas Jamal river intake will provide a reliable service to 300 households in the area, while the cost of water will reduce to only two or three USD per month.

Emergency treatment mechanism for day-to-day use

Near Yahas Jamal is a small village of Debaldek. The villagers still use the Emergency Water Treatment System (EMWAT KIT). Although the treatment is no longer available they use the system to avoid crocodiles. Seada Sheik Abdi, 30, has five children and is fetching water using the EMWAT kit. “It’s better to get water here. It is safer. We are not worried that our family will be attacked by the crocodile,” she says. “If there was clean water I would not have to make four trips here in a day. I need eight jerry cans of water, which takes up the majority of my time.” The district administrator, Aden Mohammed Gile, acknowledges the need for a more reliable water supply: “We would like to move the community to a more sustainable water supply. But currently we have no other alternative and we are waiting for the river intake project to finish. There are other villages far from the river intake and they are also using the EMWAT kit for daily water use, we really need more resources to provide to every village,” he emphasises.

Today, UNICEF is developing a mitigation plan in the Somali Region to deliver a sustainable supply of water by tapping into existing water sources that will provide an adequate quantity and quality of water throughout the year.

Besides the emergency response to seasonal flooding or drought, UNICEF is focusing on making its WASH programmes resilient. “The river intake programme in Yahas Jamal and Sankabar when complete will support around 1,300 households and is one of the means to provide clean water to the people. But we need more funds to construct more river intakes in villages along the Shebelle river basin so people living close to a water resource do not have to struggle with crocodiles and disease,” says Samuel Godfrey, UNICEF Chief of WASH.

In the coming few months, Yahas Jamal and Sankabar villages will have clean water. Other villages are waiting to see if the time will also come for them to also get the new infrastructure. But for now, Istahil and her neighbours have to endure the time consuming and life endangering task of fetching water like the rest of the women in the villages.